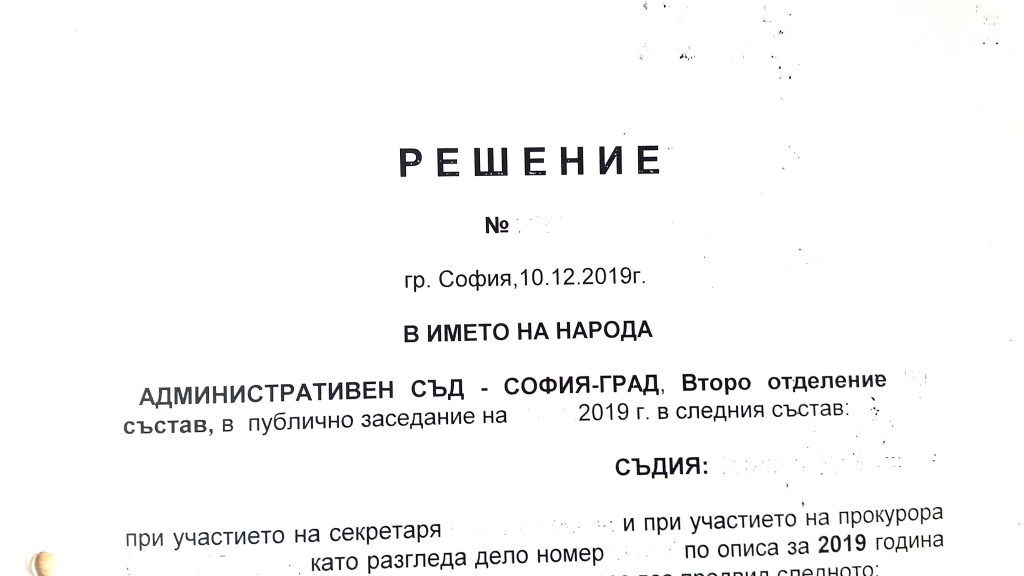 STATE AND MUNICIPAL LIABILITY FOR DAMAGES

BOTH NATURAL PERSONS AND LEGAL ENTITIES MAY CLAIM FOR DAMAGES

The State and municipalities shall be liable for damages caused to natural persons and legal entities due to unlawful acts, actions or omissions of their authorities and officials during or in connection with performance of administrative activities.

The State shall be liable for damages caused by unlawful acts or actions of its authorities and officials pursuant to Article 7 of the Constitution. This specific liability is further governed by the State and Municipal Liability for Damages Act /SMLDA/ adopted as far back as 1989. It also identifies municipalities as bearers of liability.

In addition, the State and municipalities shall be liable under the civil law – the Obligations and Contracts Act, to the relevant civil court depending on the relevant legal basis.

The administrative courts have jurisdiction over actions for damages:

– caused by unlawful criminal decrees, actsions and omissions related to imposing administrative penalties, including those for awarding costs in appeal proceedings;

– resulting from violation of natural persons’ rights related to equality of treatment caused by illegal acts, actions or omissions on part of state authorities and officials, including when proceedings under Section I of the Protection against Discrimination Act have not been conducted.

– resulting from not allowing a civil servant reinstated to their office to perform the relevant position;

– caused by unlawful acts, actions and omissions of the authorities responsible for the execution of the penalties in case of and in connection with the execution of imprisonment and probation, or detention on remand in custody

– caused by unlawful acts and omissions of the administration of judicial authorities;

– arising from state-owned and municipal transport networks and facilities;

– origing from unlawful acts, actions or omissions of bailiffs;

– caused by unlawful acts, actions or omissions of registrars under the Commercial Register Act;

Pursuant to Article 1 of the SMLDA, the liability also includes damages caused by the effect of by-laws repealed as illegal or declared null and void.

Damages that are subject to indemnification can be both pecuniary and non-pecuniary (moral) damages.

The injured party (whether natural person or legal entity) should seek indemnification for the pecuniary or non-pecuniary /moral/ damages suffered by them from the relevant authority that committed the unlawful act.

It is important to note that the State and the municipalities shall be liable to pay indemnification for all pecuniary and non-pecuniary damages that are a direct and immediate consequence of the damage. It does not matter whether the official concerned has caused the damage or not. Therefore, when the injured party seeks indemnification for the damages suffered by them, they should not prove culpable behavior to the respective human rights or administrative body.

The claim for damages shall be brought before the court at the place where the damage has been sustained or at the current address or the seat of the injured party. It shall be directed against the bodies whose unlawful acts, actions or omissions have caused the damages. Thereby, the Bulgarian legislator has introduced a relief for natural persons and legal entities that can bring actions for damages to the competent court at their address, rather at the address of the authorities, which in most cases is in the City of Sofia.

If the injured party has suffered damages as a result of unlawful acts of a court and the claim is brought before that court, then the latter is obliged to refer the case to the nearest competent administrative, regional or district court. This guarantees the impartiality of the court in the relevant proceedings.

THE TYPES OF LEGAL PROTECTION IN COURT

Any natural person or legal entity may be a plaintiff in proceedings under the State and Municipal Liability Liability Act. Where non-pecuniary damages have occurred as a result of the unlawful actions of a state or municipal body, the injured party or their heirs may be a plaintiff.

The most common examples of unlawful acts or actions causing damages to natural persons are acts of a prosecutor’s office and courts:

– Acquittal judgement of a court;

– Order by the prosecutor to terminate the pre-trial proceedings in which there was a previously brought charge;

In both cases, there are grounds to bring an action for damages for the unlawfully brought and maintained charge, which no longer exists based on any of the acts listed above.

However, not infrequently, damages also occur as a result of unlawful acts of government agencies. Examples include:

– Acts of the Registry Agency (Property Register and Commercial Register, where there are unjustified refusals to enter documents or applications in files of natural persons or legal entities):

– Acts of the Agency of Geodesy, Cartography and Cadastre /AGCC/ – where, for example, with an order for modification of a cadastral map the boundaries of neighboring real estate properties have been violated;

– Acts of the National Revenue Agency (NRA), and many others.

Yosifova, Ivanov & Petrov Law Firm can render assistance to natural persons and legal entities who have suffered damages caused by illegal actions of the public authorities and officials, who wish to bring a legal action for damages for the pecuniary and/or non-pecuniary losses suffered by them.

If you have any questions, do not hesitate to contact us through the „Contacts” section.